Technique: Half Double Crochet with US D hook (I think)

I worked on these for over a year before they were mostly done and didn’t do the finishing until it was time to give them away. They were originally intended for my friend who was having a baby at the time (in 2004!) however, the baby grew way faster than the tops did so these went to the wayside. I estimate that they took about 12 hours each. The yarn is a cotton, fingering weight that really made it difficult to do the picot edging. Anyway, two and a half years later my two cousins had babies so I finally did the finishing and gave them away- the blue was given in August and the White in October. In fact I did the finishing on the white one while spending the day with the recipient’s mother. These are just beautiful. The pictures really don’t do them justice but I’m extremely proud of them.

Here’s one of the baby girls. 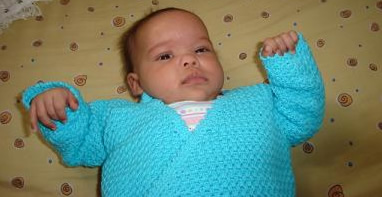 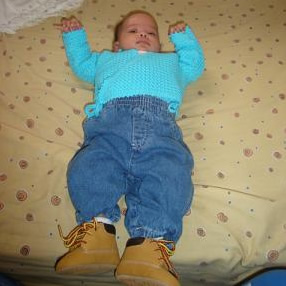 I love the jeans and boots combo.

P.S. While I haven’t posted much, I’ve definitely got a lot of projects in progress. Many of them just require some end weaving. Stay tuned for more finished objects and an updated works in progress list. I plan to list them all and there are quite a few.